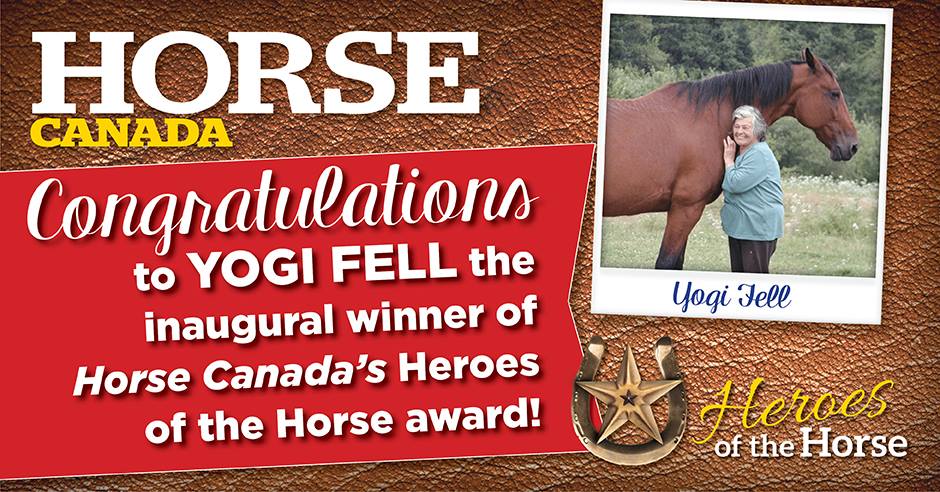 Being the 2017 Hero of the Horse Award from Horse Canada, gave me so much encouragement for what I have done and what I do. This is a Sanctuary for horses, but also it helps a lot of folks. I cannot save you all, but the sanctuary can give you a place to save yourself. Come when you can. love and hugs
Yogi

For Prince Edward Island’s Yogi Fell, winning Horse Canada’s inaugural Hero of the Horse Award is about way more than recognition and the $2,000 prize. It provided her a morale boost in what was a tough 2017.

“Everything fell apart this year. Even me – I broke my arm. It was one thing after another,” said Yogi, 76, who operates the non-profit Handibear Hills Horse Sanctuary in South Granville, about 40 kilometres northwest of Charlottetown. Here, for the past 30 years, Yogi has taken in and retrained scores of unwanted and abandoned horses, giving them a new life and a purpose – to educate people, mainly youth, about proper equine and stable management. Her belief was, and still is, that the more knowledge people have, the fewer horses will need rescuing. To that end, 700 children have come through her horsemanship program, the Trailblazers Horse Club, since the 1970s.

Yogi won the online contest – which recognized individuals who rescue and care for horses throughout Canada – by a huge margin. As word spread on social media and local news organizations that Yogi was one of 10 finalists for the award, supporters and fans from the Island and all over the world voted.

“What the contest has done, it has brought so many of the kids back to the sanctuary. I’ve had calls from kids who were here 30, 35 years ago. So, it really put me in touch with a lot of kids that you wonder where they are, and you wonder what’s happening in their lives. That’s been really special,” said Yogi, tears welling in her eyes.